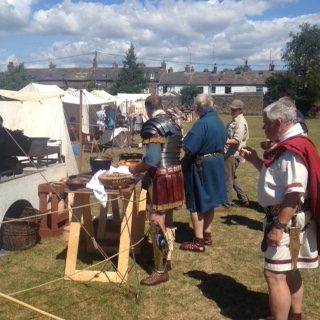 Last weekend the team were treated with a series of performances by groups of dedicated re-enactors, for the annual Ribchester Roman Festival. This was a wonderful opportunity to see the Roman cavalry and infantry in action, who entertained the crowd with impressive displays of horsemanship and military prowess.

Despite the continuing heat, genuine Romans were dressed to the nines and smiling as they talked about their lives and work, explaining their fascinating displays and wares.  A couple of Roman matrons sported incredible hairstyles following the fashions of the imperial court and explained Roman beauty secrets.  Did you know that crushed butterfly wings make a dazzling green eyeshadow, chalk applied to the skin creates that desirable pale tone and the heady sweat of gladiators is a potent aphrodisiac?  We found the offer of free sausages more tempting than these tips to be honest, but the students learned a lot about the Roman experience and aspects of material culture. 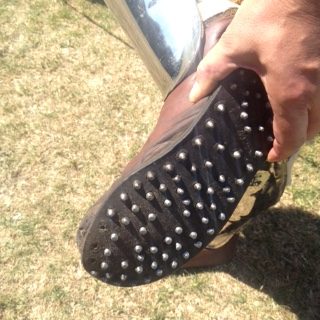 We examined the soles of various replica hobnailed boots to better see how many nails might occur in one shoe – to the dismay of a few of the team, it was definitely a lot!  The number of shoes we’ve been finding this year is growing steadily, which means a lot of extra work in finds processing.  It also slows down the pace of excavation as we carefully plan and record each individual nail.  But joking aside, we are really excited about our hobnail finds as excavating and recording hobnailed shoes in a drier context like ours doesn’t often happen on a dig; with the leather sole gone, the tiny hobnails left are easy to miss, so our painstaking work here will aid research into this important element of design history. 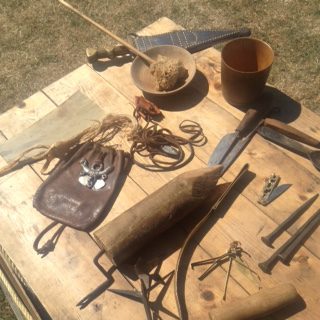 Many stalls had replica objects based upon real items found in various museums across Europe, including a stall showcasing the kit of a Roman legionary.  The assemblage of objects included repair tools, writing implements, camping kit and things for gaming and gambling – these are the sort of things we’re looking out for while we excavate, as they paint a picture of the social life of the soldiers stationed here at Ribchester.  Incidentally, they’re also the kind of objects our team of archaeologists possess.  Life on an excavation is in many ways similar to the life of the legionary and sometimes we really do feel that we are walking in their shoes. 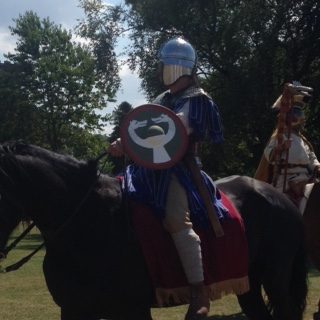 The Romans were very fond of gambling and we were encouraged to cheer our support for our favoured horses during the cavalry displays.  The riders used leather saddles reconstructed from examples found at Vindolanda on Hadrian’s Wall which have no stirrups; they re-enacted various cavalry moves like team formations and shooting arrows at a target, demonstrating the balance and skill required by such soldiers.

We also ran a booth at the festival to promote our work and answer questions, encouraging visitors to come see the excavations which they did in big numbers.  We’ve also been featured on the local radio and news since the festival so we’re happy to see more people responding to our finds and visiting to find out more.  We have an Open Day on Saturday 14th July with a tour of the site by our lovely director Ash and a talk about the project this year.  Be sure to come to take a look before our season ends on Sunday 15th July!